The 2019 FIFA Women’s World Cup was a watershed moment for the women’s game, and the UEFA European Women’s Championship is primed to reach similarly great heights.

The Women’s Euro 2022, delayed by a year due to the Covid-19 pandemic, got off to a historic start on Wednesday (July 6) as hosts England’s 1-0 win over Austria at Old Trafford in Manchester was watched by a crowd of 68,871, a record attendance for the tournament.

That easily smashed the previous high of 41,301 set in 2013 for the final in Sweden when Germany defeated Norway.

This year’s competition will be broadcast in 195 territories and is expected to reach a global live audience of more than 250 million, up significantly from 178 million for the 2017 edition in the Netherlands. 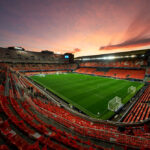 Interviews
In the Boardroom with Valencia CF 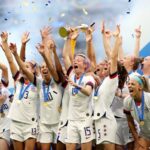 The BBC has host broadcast rights in the UK, while major international broadcasters BeIN Sports and ESPN will show the tournament in the majority of countries around the world.

From a commercial perspective, UEFA has sold all sponsorship packages for the tournament and attracted several new partners, while record crowds are anticipated throughout based on ticket sales.

European soccer’s governing body expects this edition to be a landmark event commercially.

“It will be the biggest Euro we’ve ever held,” Guy Laurent Epstein, UEFA’s marketing director tells GlobalData Sport. “The revenues, altogether, will quadruple for sponsorship and television alone without counting ticketing and hospitality which are dealt with separately but have also been very successful.

“From a commercial standpoint, what has been extremely decisive in the evolution is the change of policy that we established back in 2017 to develop a dedicated women’s football sponsorship program.

“Previously, like many organizations, the women’s sponsorship was packaged together with the men’s tournament which was useful at a certain time because we were bringing big brands into women’s football but some of them had no necessary interest in leveraging those properties and those opportunities.”

UEFA made the decision to unbundle sponsorship rights for women’s competitions in November 2017 for the first time as part of a wider commercial overhaul for the women’s game in Europe.

The unbundling took effect for the UEFA Women’s Champions League (UWCL) in 2018 but this will be the first national team competition under the model.

“By creating a dedicated sponsorship program for women’s football, we only brought on board brands that were willing to invest, leverage, and promote women’s football and that has been a major change in the dynamics,” Epstein explains.

“We also wanted to make sure that we were generating revenues purely on women’s football because in the past it was part of the bigger rights where it was difficult to know what exactly was attributed to women’s football.

“So that has been the significant change with regard to sponsorship and we have 18 brands involved in the Women’s Euro, which is very big and shows there was very strong interest from global brands and local brands to be involved in the tournament.

“Plus, the broadcast platform will also be very significant with visibility across the world with very strong coverage in many markets.”

The local agreements were brokered by Sportfive, the international sports marketing agency that worked with UEFA and the FA to land commercial partners.

The association with the tournament represents rare sports sponsorship deals for the likes of LinkedIn, Starling, and Pandora.

“The combination of women’s football, a finals tournament, and the UK as a market brought interest for new brands that we didn’t speak to before,” Epstein says.

“It’s interesting to see the type of brands that are coming into the project from a global or local level.

“It’s a combination of global football and women targeted brands that have come on board and the combination of all of these partners with different angles will make it very exciting and reach out to a lot of different types of people.”

Despite the 12-month delay caused by the pandemic, around 500,000 tickets have been sold for the competition, more than doubling the record 240,000 fans who attended in 2017.

The delay has ultimately worked in UEFA’s favor as the Women’s Euro is the only major soccer tournament this summer due to the men’s World Cup in Qatar switching to a November/December slot.

That added exposure and the big crowds expected at the 10 stadiums across the nine host cities have fueled the interest of major brands.

For that reason, Epstein is confident the Euros can have a bigger commercial impact than the 2019 World Cup in France.

“For sure it can at the very least [have the same impact as the World Cup] but I believe it will be even more than that because of this dedicated sponsorship program,” he predicts.

“At the time of the World Cup in 2019, FIFA was continuing on the basis of what we did before so it’s not a criticism at all, it’s just that it was packaging the rights altogether for the FIFA events. That’s where I believe that this program will be even more successful than the World Cup program from an investment perspective, from the partners, and an activation program that would be far stronger.

“The activation that [the partners] will do this summer is very significant and also because it has been sold separately. There is a very strong interest from the top management in the brands we are dealing with and therefore there will be a further push than there was before.

“FIFA now is following our path and will develop a dedicated women’s football sponsorship program as well. So, it’s a question of time but we are all getting there together with making women’s football very strong.”

The record ticket sales and projected TV audience figures will be further proof of the growth women’s soccer has experienced in recent years.

Epstein expects the Women’s Euro to capitalize on this general growth and “contribute significantly” to it, as well as benefit from the success of the World Cup.

The widespread buzz from the tournament in France has translated to club level with domestic leagues in England and France enjoying a period of growth as club attendance records were broken in the respective countries last season.

But the biggest leap for the sport was illustrated in the UWCL last season as a world record crowd of 91,553 watched Barcelona Femeni, the women’s team of Spanish giants Barcelona, beat Real Madrid in the quarter-final second leg match at the Camp Nou in March.

UEFA revamped the club competition with a new structure, including a group stage, and introduced a centralized commercial model for the 2021-22 to 2024-25 cycle.

The UWCL final between Lyon and Barcelona set a new viewership record with a cumulative global audience of 3.6 million, while global streaming platform DAZN generated 64 million views on its streaming service and UWCL YouTube channel from over 230 countries and territories throughout the season.

The 2021-22 season was DAZN’s first as the exclusive global host broadcaster for the UWCL as part of a four-year deal it struck with UEFA last year.

Epstein believes the domestic leagues and club competitions are now able to maintain the appeal and interest generated from the women’s national team tournaments.

“Historically we had a peak [viewership] every two years with a Women’s Euro and World Cup and after the event, it was going down because it was not accessible at all,” he explains.

“It was impossible to watch and domestic leagues were not broadcast either and there was nothing really available.

“So having the UWCL, that are a very high-quality level of games, the football is very good and all the big clubs have invested now into women’s football so it brings the level on a yearly basis quite high where before it was going down to zero almost.

“But with the UWCL we are raising the bar every single year to keep the interest in women’s football. It’s very important, not only in the peak time of the final tournaments but also during the season and that’s a very important element and you can combine it with the domestic leagues.”

Epstein continues: “In England and France, for example, these domestic leagues are growing and increasing in quality and have a very strong broadcast platform for some of them.

“If you combine all these elements of the peak events, that are very popular for the large masses, and we follow the work that is done behind the scenes, it will raise the bar significantly for the long-term future of women’s football. We are very dedicated to making it work.”

Staging the Women’s Euro in England, a major soccer market, will undoubtedly help accelerate many of UEFA’s objectives in terms of continuing to grow the sport with the support of the FA. This is the country’s first women’s soccer tournament since 2005.

UEFA and the FA recently released the Women’s Euro 2022 Pre-tournament Impact Report, which outlines that it’s on track to be the biggest women’s European sport event in history.

The report, produced by EY, indicates the tournament is expected to deliver £54 million ($64.6 million) in economic activity to the nine host cities of Brighton & Hove, London, Manchester, Milton Keynes, Rotherham, Sheffield, Southampton, Trafford, and Wigan and Leigh – this would be nearly four times as much as the previous edition.

“England is a great location to have a tournament and I believe it’s a win-win for two reasons,” Epstein outlines.

“The partners are activating their rights more because England commercially is a big market so it’s also very important for them to show this association with women’s football and take the benefit of being associated with it.

“The second element is the ability to bring viewers to the stadium. We have sold a record number of tickets already. But interestingly, this is the first time that we’d sold so many tickets in advance of the tournament.

“England was interested to use the tournament to grow women’s football longer-term and leave a legacy of this tournament and create more opportunities for the female players in the future to play and that’s probably the legacy to the tournament that England wants to capitalize on.”

UEFA and the FA have teamed up to launch a dedicated legacy program across the nine host cities to develop the sport from grassroots through to the senior level.

As Sue Campbell, a Euro 2022 board member and the FA’s director of women’s football, stated, the aim for the organizers is twofold: to deliver a record-breaking tournament and to leave a tangible legacy to grow the women’s game.